As promised I have returned with part two of things about trees in Japan, aka the Sakura season.

Today I visited the rather lovely, if not also very rural Kawazu ‘the land of sakura!’. The advertising is actually ‘it’s always beautiful’ but I think mine is better and since it’s not always beautiful (because after the blossom is gone you just have a load of naked trees and sad tourists) if you are going to tell a lie you might as well make it sound a little exciting.

That said, it really was beautiful today with most of the trees in full bloom and there is a recommended trail that starts at the sea and runs for about four kilometers alongside a river which is full of lovely lovely trees.

This is the beach. No there are no trees here, they are behind me. Sneaky trees. 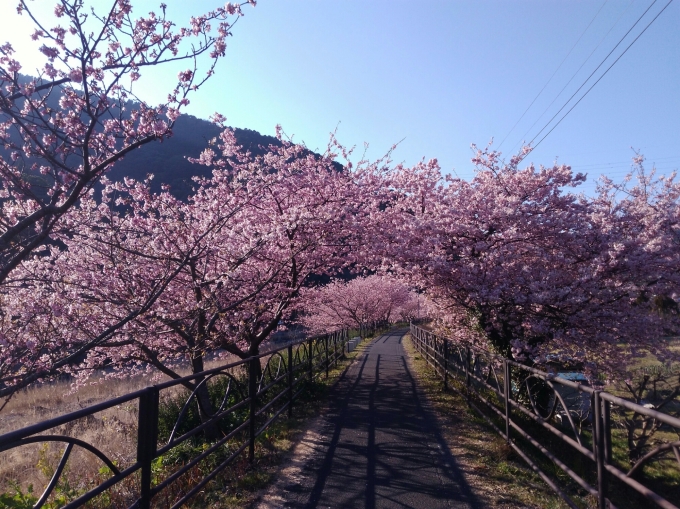 This is the trail, in case you hadn’t guessed. But now the beach is behind me. Sneaky beach.
In addition to all this lovely nature you can also buy a range of sakura themed novelty items and foods. You can also buy a tree if you want to take one home with you to save on traveling next time, but to be honest I’d recommend just traveling as you would need to buy a lot of trees to really compete with Kawazu and your neighbours probably won’t be too pleased when your forest of cherry trees starts growing through their house.

There are of course other things to do and see too, as Kawazu is also home to one of the rare hot natural springs of Japan, and provides water for many onsen (public bath) and foot spas around the area. You can also find some interesting character statues along the way, including these two whom I have named Crazy Eyed Steve and Simon respectively.

If you do want to follow in the trail that I blazed behind thousands of other people each year, then you can get to Kawazu by train from Atami. Be careful though as there are two types of train and the fancy looking one is nearly twice the price (although also a fair bit faster). The standard train takes a little over an hour, but you get a nice costal view as you go. Also if you don’t want to spend too much on food, as the stalls can be a little pricy, then there is a Family Mart near the beach and a 7/11 by the station.
So even though it’s a little bit out of the way and for me costs about the same as a trip to Tokyo, I really would recommended it if you get the chance and have the time, it’s a very nice way to spend a day.

This has been a review about trees and things from Japan.